I almost did not see Shanghai. It was a good thing I pushed through with the trip. Thank goodness!

Before visiting Shanghai, I thought China was Beijing and the great wall is the bucket list item to tick. That being dealt with, I did not feel an urge to visit Shanghai. However, due to the many low cost flights to Shanghai bombarding my email, I thought, why not? 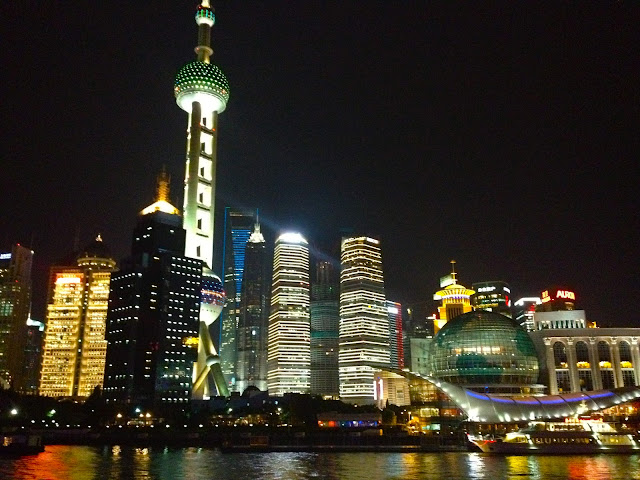 So I traveled, alone, under our packaged tour of course. I find that in traveling to China, a packaged tour is a must. Safety, language barrier, and simple sanity is eased by doing that tiny little thing of booking a tour.


Shanghai is described by the Lonely Planet as " the most dynamic city in the world's fastest-changing nation".

For me, it was China...but not quite. For some of the places I went to I felt I was in Venice, in some I felt like I was in New York, and yet for others, It felt like England.

It did not feel as restrictive as Beijing and it felt fresh, new and friendlier to tourists. The people dress up well, but when they dress down, you'd see them in their PJs. Surprised to see one in the morning. Much more when I saw several while I was at the grocery one night.

Must see in Shanghai

One:  The Bund - a stroll in the Bund gives you a bird's eye view of what Shanghai was, is and is becoming.

Frommer's description of this fave activity in Shanghai:
The most widely known street in Asia, with its gorgeous colonial buildings that were the banks, hotels, trading firms, and private clubs of foreign taipans (bosses of old Shanghai's trading firms) and adventurers past, deserves to be walked over and over again, especially now that it has been given a US$700-million face-lift. See up close the exquisite architectural details of thePeace Hotel, the Customs House, the former Hong Kong and Shanghai Bank, and scores of other buildings, some lavishly restored, others closed and awaiting development. Then head across the street to the Bund Promenade, which has been widened and gussied up with new trees and park benches. Here you can mingle with the masses while admiring the splendor and grandeur of old Shanghai on the one side, and the gleaming promise of new Shanghai on the other side of the river. After you've seen it by day, come back again at night for a different perspective.
Read more: http://www.frommers.com/destinations/shanghai/0717020001.html#ixzz2HZ5rrwGo

Two: Water Villages - be it the famed  Zhujiajiao Water Town or the more proximate water  villages to Shanghai, you would surely get a glimpse of how the old settlers have conducted their living along the river banks of Shanghai. Tagged as the Venice of the East, Zhujiajiao village dates back to the Yuan Dynasty and was an important market place. Today, I'd  have to say, buy your "pasalubong" from here. That's all. The endlines line of stalls along narrow alleyways by the river banks are amazing to see. You could easily get lost in the myriad of commerce that are both tasteful, unique and very Shanghai. Unlike in other market places in town, items seen in this water village are the types you'd love to take as a keepsake of the place. Romantic bridges (36 in all) is the most picturesque feature of the Zhujiajiao Water town. Ride a gondola paddled by locals and you travel back in time. 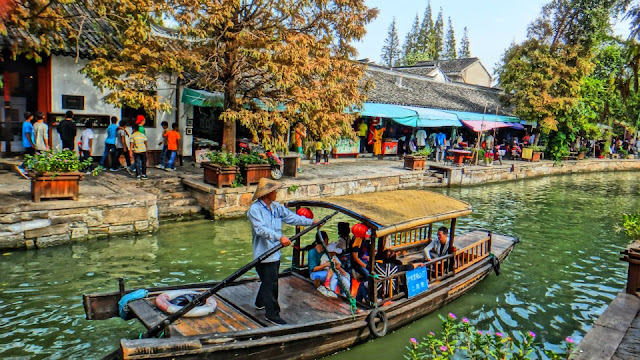 Three: Laze around in a coffee shop in Xintiandi. But I would not need to tell you that. The moment you enter this corner of Shanghai, that is exactly what you'd like to do. Come back after the tour and sip coffee, people watch and relax.

Four: Shop. Shanghai has many commercial "gardens" of bazaars and large malls in which to get your shopping fix. one of which is the Yu Yuan Garden Bazaar. Scenery, shops and food. What else can you ask for? Just a short reminder: (just me talking) if you are not an expert in looking at jewelries, ask someone you trust who is before you buy. If you are not a doctor and are not sure of the medicine's effect on your health, think twice before any purchase. As in any tour, you are likely not going to be able to come back to return, complain or follow up on any of your purchases. Be safe.

I came to Shanghai in the fall and it felt just right.

Shanghai has four seasons: Spring is from March to May, Summer is June to September , Autum is from October to November and Winter is from December to February.

Ask anyone and the first food to come out of the fave list is the Xiaolongbao. The dumpling, with flavourful soup within a delicately pinched dumpling wrapper is such a craze in Shanghai. Tourists stand in line to have a taste of this Shanghai snack.

Another one to satisfy your palette are the hairy crabs. If you happen to be in Shanghai while it is in season, do grab a couple of these crustaceans.

While you are at it, try the noodles sold in the streets for a traditional food fare.

Shanghai is a fresh addition to any traveler's list of places to go to. It is not a historic tick down your UNESCO inspired list but it gives you a fresh taste of China.

Xperiencetravel
Travel to nearby places. Travel to that part unfamiliar. No matter where you are or where you would like to be, open your eyes and learn. Change is just about to happen.
Newer Post Older Post Home

Our line of services

We customize tours for your group.
Feel Free to inquire about the following destinations below:

Send us your inquiry and we will be in touch!